Unlike previous years, in 2012 companies have been selective in undertaking recruitment, especially at senior management levels. In the past year, demand for recruitment to new positions has been quite low, with even the hiring of replacements being limited. Instead, companies promoted internally to create opportunities, both by retaining talents and by encouraging employees to help discover their hidden capacity to improve the working efficiency of talents. Consequently, they could reduce the cost of new recruitment, and avoid the risk that new employees would not fit the company culture. Also, companies have been becoming more flexible in putting Vietnamese into senior management positions, which were usually filled only by foreigners.

By contrast, in the first six months of the year, recruitment needs in banking and finance were pretty stable. However, this demand has been decreasing in the last six months of 2012. Of particular note, during this year a significant labour demand in High technology (Hi-tech) emerged, especially for positions as software engineers.... There were also some industries which still had recruitment needs in 2012, such as consumer goods, pharmaceutical, manufacturing.....

In terms of employees seeking new roles, labour market demand was not as active as in previous years. Employees tended to choose and look for jobs more carefully and strategically. For senior employees in particular, salary was no longer a main concern; instead, when considering a job, they would seek more details about the employer’s strategy, company vision, mission, the management boards, and company culture… to understand whether the role and company were a match for their values ​​and expectations. There has been a tendency for employees to demonstrate higher commitment and loyalty to enterprises, resulting in a need for more and better information about the labour market, industry and other key factors in order to make appropriate choices.

In terms of wages and benefits, in the past year, companies adopted a strategy of paying quite differently compared with previous years. They paid considerable attention to how to use the wage and benefits budget efficiently. In an economic situation as volatile as that of 2012, it is hard to adjust the salary budget; as a result, companies have had to allocate the rate of salary, bonus, salary increase, welfare etc for each level effectively to encourage and motivate talents. According to a salary survey by Mercer and Talentnet in 2012, salary increases were higher than the 9.5% forecasted inflation. Multinational companies gave employees an average of 13.0% salary increase, while local companies gave a slightly higher salary increase of 13.3%. When comparing pay between big local companies and multinational companies, in general, there was still quite a gap between them. While the gap was only 19% lower in local companies at staff level, it gradually widened to 25% at professional level, and became much wider at management level, at 30% or more. However, since local companies often use a greater multiple of monthly salary in bonuses compared to foreign companies, when comparing total income, which includes salary and bonuses, the gap between local and foreign companies is smaller. Currently, to attract talents from multinational companies, local companies often have to pay outside their salary range. 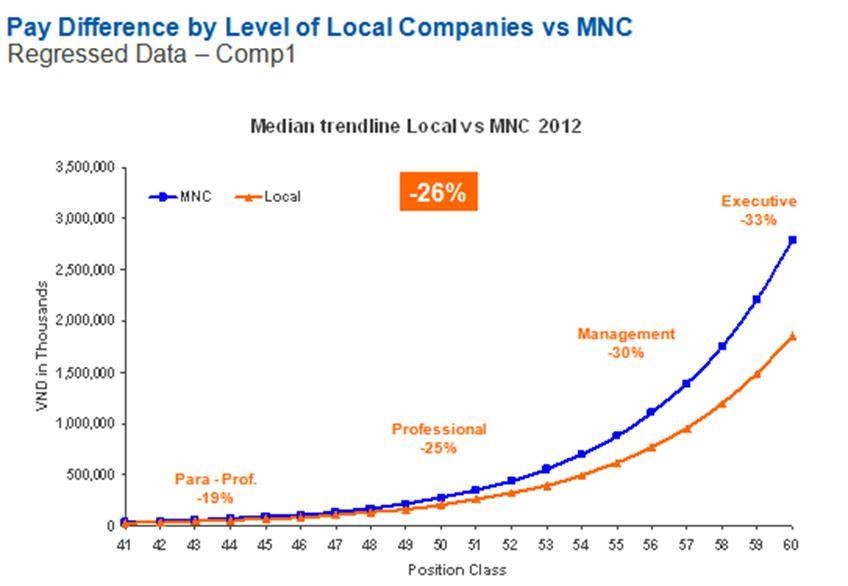 Nevertheless, there was a marked difference in pay between foreign companies and Vietnamese companies. While salaries for staff and professionals of local and foreign companies were almost the same, the differences in the salaries of managers and executives in foreign companies were quite high. This showed that foreign companies paid greater attention to the salaries of management level employees, who play a vital part in the company’s development, while local companies still do not differentiate between management and staff level salaries. In terms of salary and benefits, local companies should be using their salary budgets more efficiently in order to motivate and attract talents. They need to have a proper pay strategy to recruit and retain talents, who can really contribute and commit to the development of the business.

Furthermore, according to the 2012 salary survey report by Mercer and Talentnet, when making decisions on the salary increase budget, the majority of companies consider company and individual performance and market competitiveness as the most important factors. Again, this demonstrates that businesses, in economic situations like that of 2012, really focus on the working efficiency of employees and consider this as the key factor in salary increases. In addition, in 2012, more and more local companies participated in the salary survey and used the survey report as a benchmark to compare their salaries with the market rate, thus avoiding increasing salaries and bonuses subjectively. Participating in salary surveys helps businesses to develop broader and deeper views about the salary market, and compare themselves with other companies in the same industry in order to have reasonable remuneration plans to ensure internal equity and maintain competitive advantage.

When economic pressures require companies to change, even HR has to change. The HR function has, in last year, become more clearly defined, more focused and strategic. As businesses change, the demand for talents and people strategies changes accordingly. Therefore, HR departments have needed to understand and engage in companies’ business to provide timely and relevant human resource support. So, in order to improve efficiency and cost savings, administrative work and paperwork, like payroll, staffing, recruitment….has been outsourced, which also reflects the global trend. This allows the HR function to focus on strategic HR input to facilitate changes in the business, and on partnering with other departments to provide the best support. 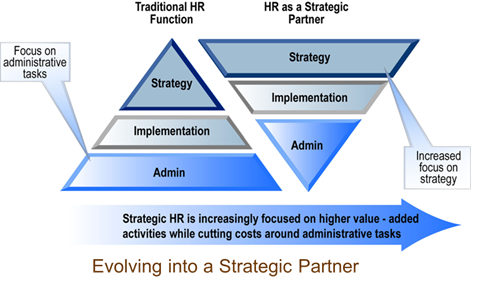 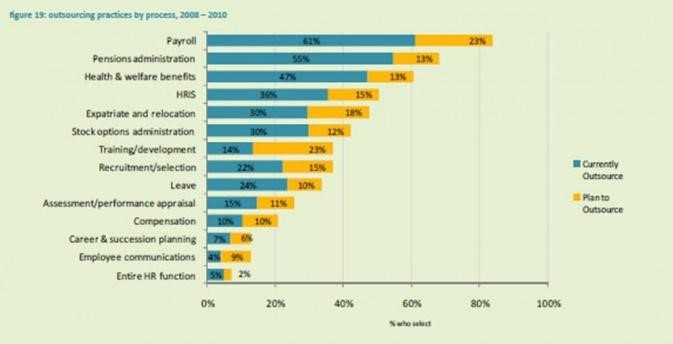 With the economy fluctuating greatly in 2012, businesses became increasingly aware of the importance of improving efficiency in operating methods and organisation. This was a time when businesses became more innovative, more flexible and focused on efficiency rather than short-term cost reduction, which often affects the morale of employees. And this led to the HR function also changing to suit the company's new business strategy. HR department has become an important part to the development of businesses. HR professionals have been becoming more flexible; ready to learn and keep themselves up to date with new information; more engaged, with a better understanding of the business; more focused on HR strategy and operating efficiency. It is true to say that there have been many changes in 2012, but these have been the motivation for HR to establish a new cornerstone. And changes in business strategy require employees and departments to cooperate more effectively, to "understand each other" better so they can contribute to the preparation phase of business changes.